The history of Brawerman Elementary School is rich in achievements:

Brawerman Elementary School opened its doors in 1999 with an inaugural class of 10 Kindergarten students. Today, Brawerman Elementary is a distinguished, fully accredited K-6 school with two locations, one on the Westside at Olympic and Barrington, and the other on the landmark Temple campus on Wilshire Boulevard in Koreatown.

The founding of Brawerman Elementary School fulfilled the dream of Rabbi Harvey Fields, then Senior Rabbi of Wilshire Boulevard Temple, to build a reform Jewish elementary school of the highest standards. Nadine Breuer, an accomplished educator, provided the creative vision, extensive experience, and strong leadership skills as the Founding Head of School. Nadine led a team of educators, parents, clergy, and community members to build the infrastructure and support the growth and development of what would become the Geri and Richard Brawerman Elementary School of Wilshire Boulevard Temple.

Nadine Breuer retired in 2016 and Brandon Cohen, a distinguished teacher and innovative administrator, succeeded her as Head of School.

With young Jewish families living or moving to areas west of the landmark Wilshire Boulevard Temple campus east of Western Avenue, Temple leaders in the 1990s recognized the need to provide for this growing Westside population and purchased property in West Los Angeles. They converted a 30,000 square-foot structure and added 60,000 square feet of new construction to create the beautiful campus, now known as the Irmas Campus, that serves the school today. 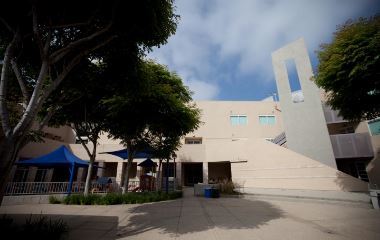